Dividing mainland France into north and south is relatively simple. Of the 12 metropolitan regions, four of them – Nouvelle-Aquitaine, Occitanie, Auvergne-Rhône-Alpes and Provence-Alpes-Côte d’Azur – are considered the southern section of the country; the remaining eight the north.

Understanding the cultural and lifestyle differences between the north and south is less straightforward, however, making it a wonderfully diverse place to call home. Nowhere is this more evident than in the country’s cities. If you’re thinking of buying a property in France but can’t decide where, join us on a whistle-stop tour of the best cities at either end of the country.

There’s already much to desire about life in the capital – history, romance, food – but with President Macron in office and the 2024 Olympics confirmed, the City of Lights just got even more appealing. A whopping €3billion will be spent on upgrading the city’s transport and infrastructure as part of Paris2024. This has pricked the ears of investors keen to capitalise on the inevitable increases in tourism and house prices. Meanwhile, the Parisian property market is already benefitting from the boost Mr. Macron’s election has given the economy.

Being just a stone’s throw from Germany, Strasbourg has a unique cross-border appeal. This is perfectly demonstrated by the Black Forest-esque medieval half-timbered houses that share the city’s twisting alleys with elegant French-style mansions and townhouses. The presence of France’s second largest student population adds to the appeal for anyone looking to enter the rental market.

Like most cities in the north, getting to your home here is a breeze. You have the option of flying to Strasbourg’s international airport or hopping on the Eurostar. Another benefit of its close proximity to Germany is the ease at which overseas property buyers can settle in to its sophisticatedly international and multi-lingual surroundings.

Sat on the banks of the Loire, Nantes’ ability to sympathetically blend contemporary architecture with traditional historic structures has inspired its transformation from provincial town to vibrant city. Visitors come from far and wide to take in the cathedral, art museum, château, old quarter and opera house. Its longstanding artistic spirit endures today thanks to the conversion of former shipbuilding warehouses into cafés and artists’ studios, which are frequented by a thriving student population.

Property buyers won’t just be heading to a city known for its l’art de vivre (the art of living, French style), they will be entering a thriving job market – Nantes was recently named as the best city in France to work for the second consecutive year.

Montpellier is an effortlessly stylish and elegant city courtesy of its grand architecture and ancient tree-lined boulevards in the Parisian style. Throw in its medieval core and it’s easy to see why more and more overseas property buyers are being drawn here. Its allure doesn’t stop there, however, with white-sand Mediterranean beaches just a short drive away. Officially France’s fast-growing city – it’s more than doubled in size since the 1960s – its students make up over a third of the population. This gives the city a spirited vibe, which manifests itself in a vibrant nightlife and café scene.

Montpellier also has a modern side, where new neighbourhoods combine natural spaces and buildings designed by some of the best architects in the business. Getting here to view the diverse selection of properties on offer is simple, with regular low-cost flights from the UK to its international airport.

Beautifully curved round the Bay of Angels – one of Europe’s most attractive urban seafronts – Nice has a reputation for old-world opulence and modern-day glamour. The unofficial capital of the Côte d’Azur also offers enduring sunshine and seaside appeal. Make the move here and you will have bustling markets, a charming old town, elegant architecture and fabulous restaurants on your doorstep. 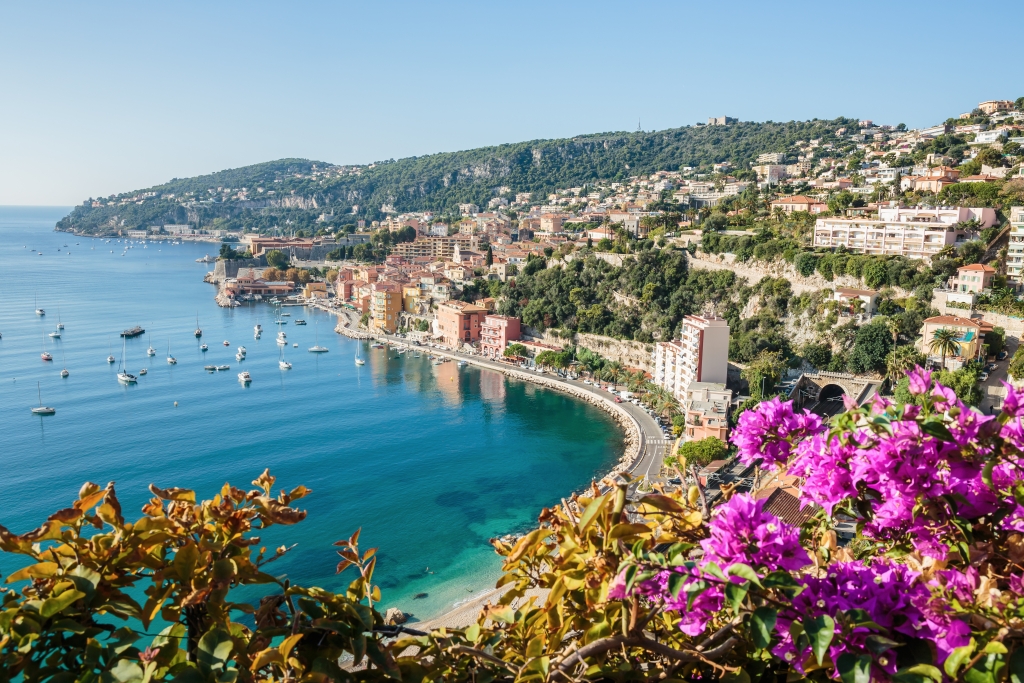 These pleasant seaside surroundings are made even more enjoyable by the Mediterranean climate, with beautiful six-month summers and mild winters when temperatures rarely drop below 10°C. With all this talk of beaches and sunshine you might be surprised to hear that skiing is very much on the agenda as well. The city’s close proximity to the resorts in the Alpes-Maritimes means you can be on the slopes in well under two hours.

Sitting on the Garonne River in south-west France, Bordeaux is the French city with everything. Anywhere that can rightly claim to be home to the largest UNESCO-listed urban World Heritage site must be doing something right. In fact Bordeaux is so popular that even the Queen of England is a fan, concluding that the city is “the very essence of elegance” after her last visit. This style and grace HRH was referring to is complimented by recently pedestrianised boulevards and a state of the art public transport system.

The Chartrons district is proving a popular destination with property buyers. One of the city’s hippest neighbourhoods, it’s a mix of elegant mansions, former warehouses, chic boutiques and charming bistros. The fast new train service from Paris has brought the journey time to the capital down to two hours, and has already begun driving up the city’s property prices.