Find the best home for you in the Costa Blanca

You’ll find the Costa Blanca on the south-eastern coast of Spain in the province of Alicante. Spanning 200 kilometres along the Mediterranean coast, the Costa Blanca extends from the northern town of Dénia to Pilar de la Horadada in the south.

Costa Blanca is a popular location for expats as it’s close to the gorgeous blue waters of the Med, is well connected in terms of transport and there’s plenty of housing options for different budgets. It also boasts over 170 beaches and coves – an astonishing number.

So, where in Costa Blanca suits you best? We explore six towns and villages that could be just what you’ve been searching for…

Vega Baga has an eclectic mix of attractions. It’s extremely popular with expats who plan to call Costa Blanca home for longer than six months. It’s well known for banks of the Rio del Segura, which are dotted with citrus trees along the coast. They add a refreshing citrus zing to the air in spring and early summer.

The Vega Baja is made up of 27 towns and villages, each renowned for their natural beauty. Expect to see sand dunes, colourful salt lakes and lots and lots of nature trails – perfect for the active expat!

If you’re a keen walker, you’ll love the Caledra del Gigante. It’s a five-hour trail that starts in Algorfa and takes you through gorgeous orange groves and along the river to Benejuzar.

Lots of international residents live around 5-10km inland from the popular coastal town of Guardamar del Segura. Most residents call the area a permanent home, so there’s plenty of established restaurants, bars and cafes to visit all year round.

Properties in the area typically consist of townhouses, villas and apartments, but there’s a lot of new builds in construction – so keep an eye out if you’re more of a modernist.

Please see below for a top-line breakdown of other popular urbanized towns that are worth checking out.

An inland town near Guardamar del Segura with a population of 16,000. Just 10 minutes away from lovely sandy beaches, this small town is famous for its beautiful cave houses in the hills. Attractions include lively markets, salt lakes, subterranean wells, nearby golf courses and impressive restaurants. 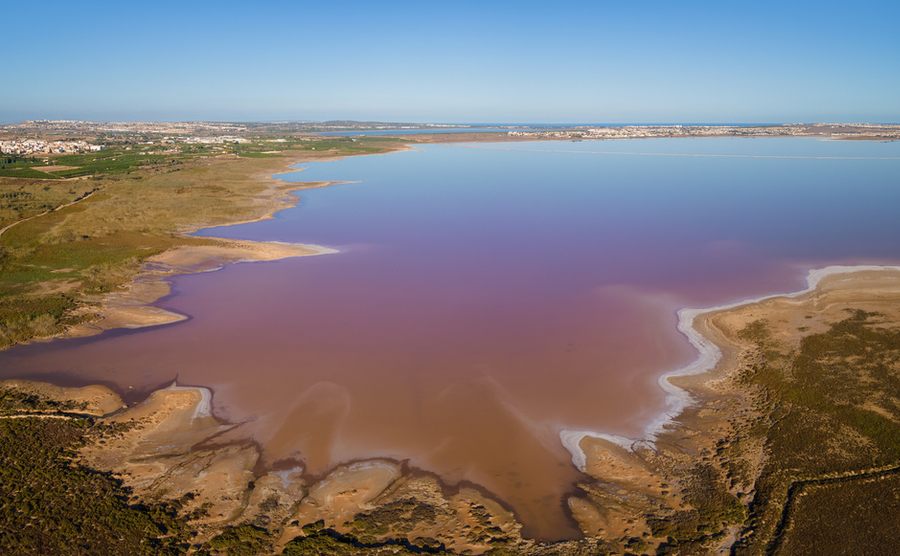 Aerial view of the salt lagoon of Torrevieja

Believe it or not, you can be in Los Montesinos in just two hours when flying from the UK. It’s a popular destination for expats, particularly those looking to retire somewhere sunny. You’re away from the touristy coast but can easily get to the beaches in just 10 minutes.

The village of Formentera del Segura lies in southern Costa Blanca and is known for its agriculture as it sits by the river Segura. It was actually named a “wonderful and underestimated” destination for Britons looking to move to Spain by the Express. The newspaper reports, “Average property prices in the small sunny town are around 970 euros (£826) per square metre.”

In the autonomous Valencia region, you’ll find Alicante’s Orihuela Coast. It’s close to the border of Murcia and is home to several resorts and urbanisations. Orihuela is popular among British expats, especially during the summer months as there’s a wide selection of amenities, restaurants and shops. It’s worth mentioning that lots of them close over winter, so it’s perfect for a second home.

That’s not to say there aren’t permanent residents in Orihuela Costa.

The beach is, of course, the main tourist attraction in the area, so if you’re looking at investment potential in the long term, look for properties along the coast. The area offers lots of apartments, townhouses and villas which lower in price the further inland you go.

To help you find the best location for you, we’ve summarised three popular towns along the coast of the Orihuela Costa. Which one will you choose? 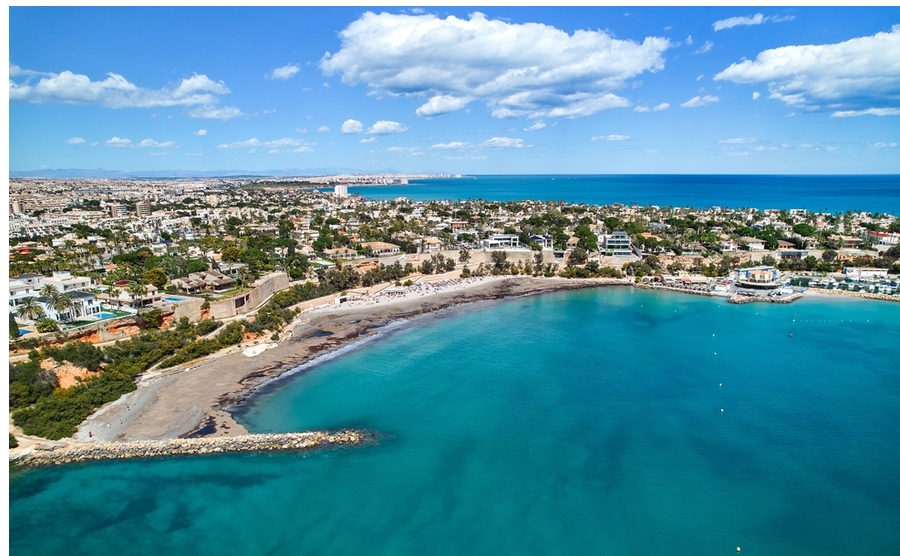 Another resort in the Orihuela Costa is Cabo Roig. The attractive area is popular among tourists and locals and draws many it’s beating heart: the Cabo Roig Marina, one of the best in Costa Blanca.

It’s considered by the World Health Organisation as one of the healthiest places to live in the world, due to a special microclimate that’s the result of salt lakes surrounded by mountains.

La Zenia is commonly known across Alicante as it is home to the province’s largest shopping centre, La Zenia Boulevard. It has over 150 shops across a luxurious complex all on one level.

In terms of living location, La Zenia has all the amenities you could ever need, right on your doorstep. Although the Spanish population is largely outnumbered by European expats, they remain a vital part of life in La Zenia.

Los Balcones is a thriving residential community on the southern Costa Blanca. It’s super close to some of Spain’s best golf courses and beaches in the Orihuela Costa. There’s no shortage of both long and short-term lets in Los Balcones and lots of people buy properties here to rent out.

In recent years, the town has massively grown due to an influx of British expats.