Where are the best places to buy for winter sun?

As the wintery weather draws in, you could be forgiven for dreaming of joining the many thousands of ‘snowbirds’ who escape chilly northern Europe each winter for sunnier climes. And, with property prices affordable but climbing, now is a fantastic time to buy! But where are the best spots to look for a property with winter sun? Join us as we explore.

Where to look for winter sun

For anyone used to a northern climate, the southern European winter can come as a surprise. While there are chilly days, and, by the sea and in the mountains, there can be a wind chill factor, warm weather lasts much longer. It’s possible in many places to swim in the sea right up to mid-October (or later if you’re feeling hardy!), and the sun still doesn’t set until 6pm even in December. Plus, with much lower rainfall, you don’t have the feeling of being cooped up indoors like in the UK or Ireland. With mild, comfortable weather and green scenery, plus fewer tourists, this is an ideal time to get out and explore the countryside, going hiking and for coastal walks.

Here are our top five spots to buy to enjoy a balmy winter. 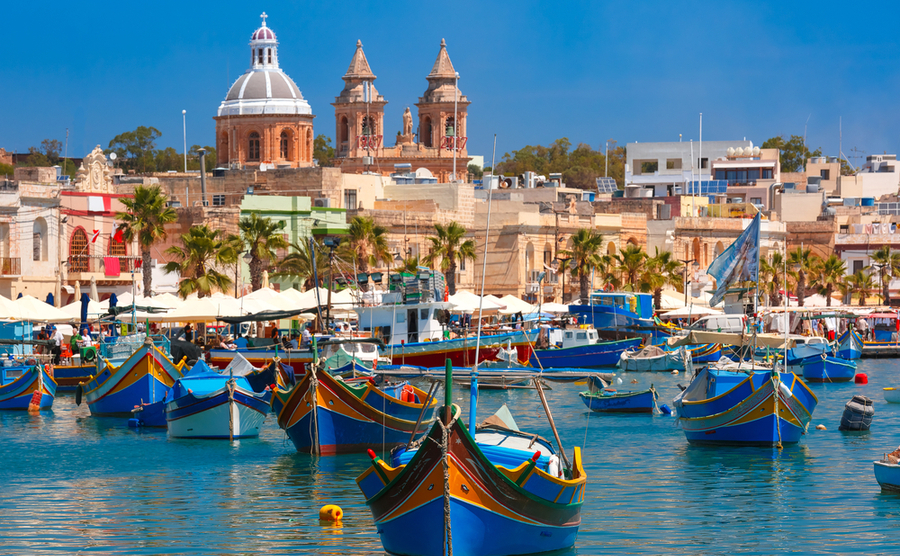 Marsaxlokk is one of the best places for some winter sun.

This beautiful fishing village is a perennial favourite among overseas visitors for its authentic atmosphere, with an active fishing fleet and harbour full of typically Maltese colourful boats, or ‘luzzu’, painted with the evil eye to ward off malfortune. The harbour is lined with fantastic restaurants serving local and Italian, Greek and Spanish cuisine. There are four coves with beautiful sandy beaches, and you’re also within forty minutes’ drive to Golden Bay and its less busy cousin, Għajn Tuffieħa. Malta is one of the sunniest places in Europe, with 3,000 hours of sunshine a year. Even in December, you can expect temperatures around 15ºC. 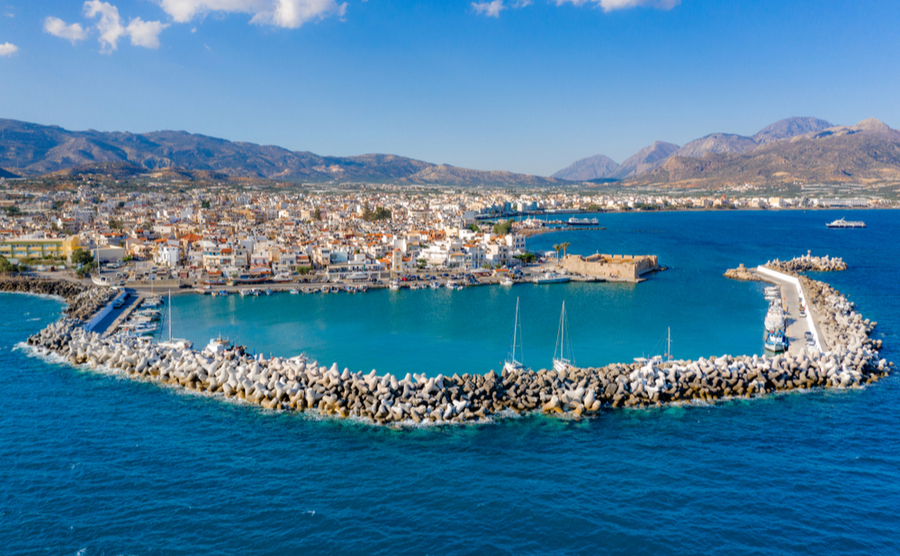 Ierapetra is the sunniest city in Greece.

Situated on the unspoilt southwest coast of Crete, Ierapetra enjoys the enviable distinction of being Greece’s sunniest city (although, at 16,000 people, it is really more of a town!). It’s ideal for anyone looking for winter sun and fantastic natural surroundings. Close by are five beautiful gorges, including the famous Red Butterfly Gorge, and you can also visit Chrissi island with its white-and beaches – protected as an ‘area of intense natural beauty’. You’ll also find the biggest wetland on the island of Crete, known for the abundance of its birdlife. 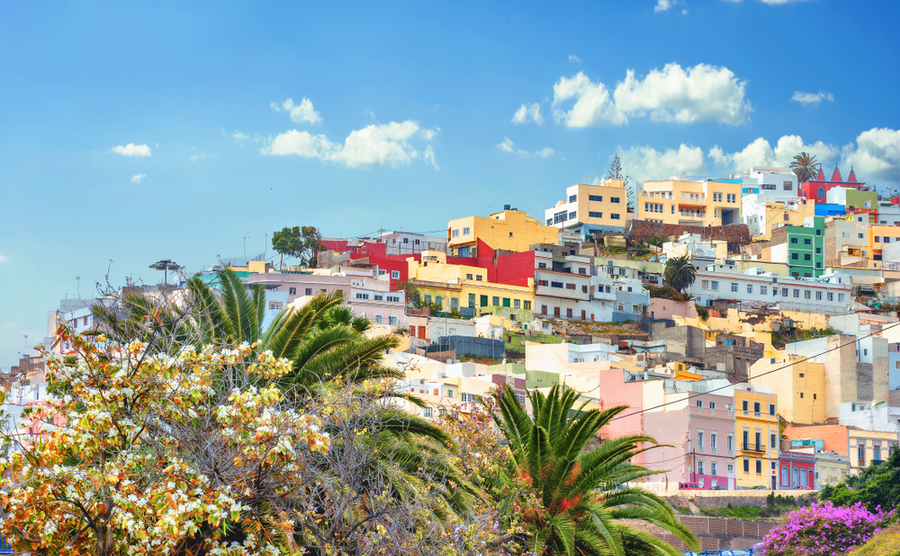 Sunny Las Palmas in the Canary Islands – the islands of ‘eternal spring’!

The capital of the Canary Islands is an easy shoe-in for any list of winter sun property locations, with a desert climate that means even December only sees around four days of rain and ten hours of daylight a day. It’s a welcoming and safe city, with quite affordable property and fantastic beaches, like Las Canteras. It also escapes the feeling of ‘over-tourism’, with an authentically Spanish centre full of beautiful, historic architecture, and a largely Spanish population. For anyone moving with children, there are a number of international schools, including two British schools, a German one and a French lycée. 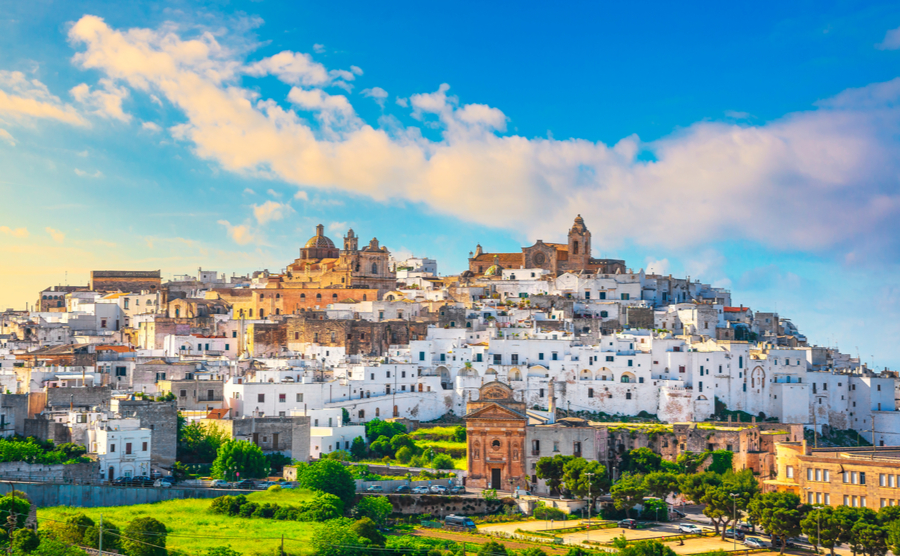 Ostuni is one of the most popular places for British buyers in Italy.

Ostuni one of the most popular towns in Italy among British buyers (hence the name ‘Salentoshire!’), and it’s easy to see why. Its white-washed houses, honey-coloured churches and palaces and warm climate are exactly what you’d imagine thinking of southern Italy. In December, temperatures hover around the low teens, and rarely drop much below around 8ºC – and you can still enjoy over 100 hours of sunshine! 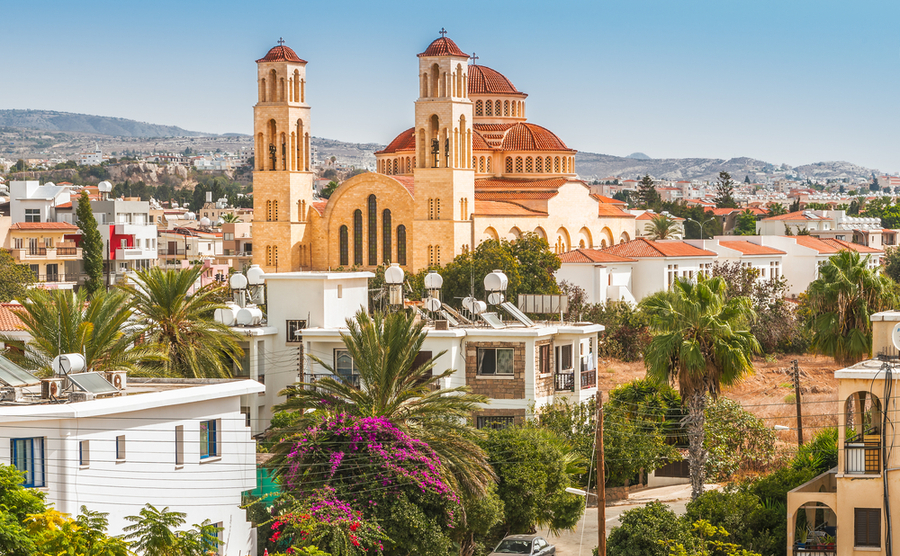 Paphos is perfect for some winter sun.

Another favourite among British buyers, Paphos offers the best of both worlds. On the one hand, the sun shines year round, with almost 200 hours of sunshine in December and a sea temperature of 19ºC. On the other hand, the Troodos Mountains are easily do-able as a day trip, so you could sun yourself in the morning and go skiing in the afternoon! Sightseeing and hiking can be tiring in Cyprus’ extremely hot summers, so the winter sun makes it the perfect time to explore this beautiful island. Head into the interior and you’ll find numerous unspoilt villages that feel a world away from the resorts of the coast.

The pound could suddenly drop at any time, again, with so much uncertainty around Brexit – but you can protect your money against this risk. Find out how in the Property Buyer’s Guide to Currency

If you find the home of your dreams but it’s beyond your budget, effective negotiation could make the vital difference. Download the How to Negotiate Abroad Guide.