France is blessed with numerous beautiful cities, towns and villages throughout the country. But while the famous names attract millions of tourists a year – Paris, Nice, Carcassone – they are not the ‘be all, end all’ of French city life. This week, we’re taking a voyage of discovery through the best French cities you’ve never heard of, from north to south and east to west. They all enjoy exceptional qualities of life and offer an insight into an authentically ‘French’ lifestyle. Could one of these be where you find your dream home?

Belfort enjoys a superb location, sitting at the entrance to the majestic Vosges mountains and surrounded by a beautiful landscape of fields and lakes. Close to Germany and Switzerland, it offers plentiful opportunities for weekend breaks around the Continent. It’s a particularly green and clean city, and enjoys warm summers and ‘proper’ winters, albeit with a bit more rain than in the west of France. There are over 1.700 hours of sunshine a year, so plenty of time to work on that tan!

The city of Belfort enjoys a fantastic, clean and green environment.

The Old Town, or Vieille Ville, with its rose-coloured buildings, is a must-see – especially the monumental Lion of Belfort, the city’s symbol. If you want to take up a new hobby, you’ve plenty of choices. The nearby ski stations offer alpine skiing at 1,200m, while you can also do sailing at Malsaucy.

This beautiful provincial town, situated in the Deux-Sèvres, is surprisingly a great place to move if you’re still planning on working; it’s one of the hubs for insurance and banking activity, and ranks just after Paris, Lyon and Lille for activity in these sectors. The old town is full of cafés where you can enjoy the Charentais weather – it’s one of the sunniest regions of France, even more so than further-south Béziers.

Niort is, somewhat surprisingly, one of the most important cities in France for insurance and banking!

Property prices are somewhat higher than the wider region, but not astronomical. Apartments sell on average for €1170 per m2, while houses go for around €1,320 per m2. The centre and north are a little less pricey than the outer suburbs of Saint-Liguaire and Sainte-Pezenne.

Situated right on the edge of the Volcans d’Auvergne Natural Park, Clermont-Ferrand is almost the archetypal provincial French town. It has a charming historic centre, dominated by its unusual gothic cathedral – made of volcanic rock, no less! It’s also famous for its excellent cheeses, including Saint Nectaire, Cantal and Bleu d’Auverge. Like Niort, it punches above its weight, and its film festival, many theatres, concerts and gigs have earned it the nickname of the ‘French Liverpool’. The film festival attracts a massive 150,000 attendees from all around the world (also a great opportunity for anyone thinking of holiday lets!). 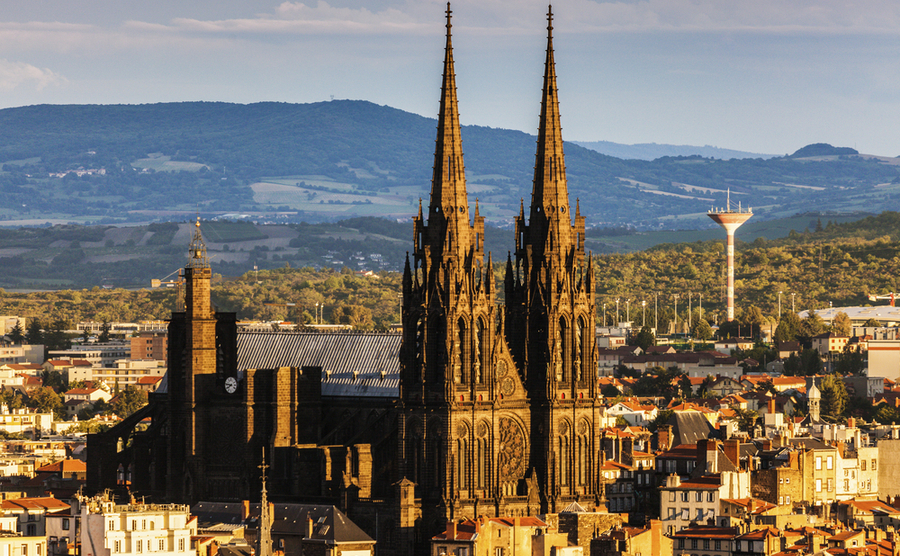 Clermont-Ferrand and its famous cathedral.

The median house price here is €1,900 per m2, and €1,740 per m2 for flats. A little more pricey than some of its cousins, but still much below what you could expect to pay in the UK or the east of Ireland.

A gorgeous walled town on the Gulf of Morbihan, Vannes feels like stepping back in time. Its wattle-and-daub houses, narrow streets and lively squares all add to the atmosphere. If you’re looking to make the most of your retirement and take up a new hobby, head out to Larmor or Séné to try your hand at watersports including windsurfing, stand-up paddling and kayaking.

Vannes offers the best of small-city living within just a few hours of Paris.

Now, you may be deep in the countryside, but major cities are easily accessible thanks to France’s excellent train network. The TGC whisks you to Paris to in two and a half hours, and it’s around two hours’ drive from the ferry port of St Malo. 10 minutes by bus also takes you to the ferry landing stage to visit the islands of the Gulf of Morbihan.

Many will know the name of Albi from the historical acts of the Albigensian Crusades, but how many of us take a moment to consider the city as it is nowadays? It is in fact a beautiful spot for a second or even primary home, with a wonderful medieval centre that has recently been classified as a UNESCO World Heritage Site. Its awe-inspiring cathedral was, at one point, the largest brick structure in the world. The local culture has a strong and proud traditional of gastronomy, with numerous delicacies to celebrate. Small biscuits, janots, are dipped in the local Gaillac wine.

Albi’s rich past is matched by a bustling contemporary scene.

The historic buildings are home to many restaurants, cafés and bars, often at reasonable prices, including La Table du Sommelier, whose owner was once France’s ‘sommelier of the year’. The average house here sells for €1,350 per m2.

If you would like further advice on the selling process in France, download your free France Guide.

Don’t miss your free tickets to the next Your Overseas Home shows in Harrogate and Epsom to meet property, financial, currency, legal and removals experts from France.